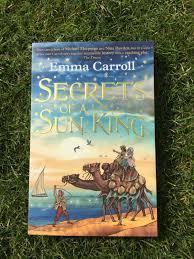 Secrets of a Sun King by Emma Carroll

In this chapter the theme (BIG idea) of secrets is explored further. At the end of the chapter Lilian says,

"It was only half a lie. But it came out easily, especially now I wasn't the only one with secrets."

Discuss or think about these different ways in which secrets feature in this chapter;