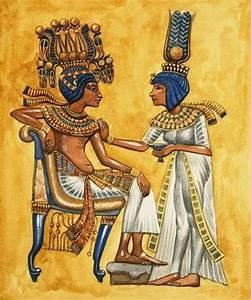 Ancient Egypt was divided up into the rich and powerful and the poorer slaves and workers. Next week we will look at the poor Egyptians, but this week we are concentrating on the wealthy and powerful Egyptians.

Have a read of this web page https://www.ducksters.com/history/ancient_egypt/temples_and_priests.php

The priests were also considered to be powerful and wealthy and it was an excellent job to have. Under the Pharaohs the priests were the next powerful.

Finally have a read through the text about the life of a nobleman in Ancient Egypt. This would have been someone who was rich and powerful http://www.ancientegypt.co.uk/life/story/main.html

Most Egyptians inherited from their parents their jobs and their roles in life, so if you parents were poor farmers you would be as well. Equally, the children of nobleman would also be wealthy

Challenge 1 Write out a fact file for two of the Pharaohs and compare and contrast them (e.g. were they the same ages when they come to power, were they in different dynasties of Ancient Egypt). You can sketch the Pharaohs as well.

Challenge 3 Where do you think the rich and powerful Egyptians got their money from? See if you can make a list of why they were so wealthy? Do you think it was right that people in Ancient Egypt were either very rich or very poor?

Unfortunately not the ones with chocolate chips.

Some cookies are necessary in order to make this website function correctly. These are set by default and whilst you can block or delete them by changing your browser settings, some functionality such as being able to log in to the website will not work if you do this. The necessary cookies set on this website are as follows:

Cookies that are not necessary to make the website work, but which enable additional functionality, can also be set. By default these cookies are disabled, but you can choose to enable them below: